Making a ConfigMgr Task Sequence Available to a User Collection

A recently had a requirement to bundle a number of applications together into a few different task sequences to make available to a user collection.  After a bit of research, I discovered that this is a pretty common question, and that there is no built-in method to make this available.  Below, I'll walk through how I was able to accomplish the task using a the task sequence, an application, and a bit of PowerShell.

First, a huge shout out to Ryan Ephgrave. I plagiarized a lot of his process and a bit of his PS to get this working.  Where my requirements differed from Ryan were:

Setting up your Task Sequence

First I need to setup my bundle.  For this example, I'm just installing four applications.  This is setup the exact way any other task sequence is setup.  Here is what one of mine look like: 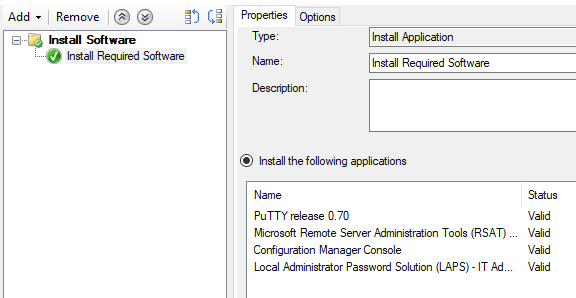 Next, I deploy this task sequence to any possible computer it could run on, but with a run time that's far off into the future.  I've setup my deployment with the following important criteria:

After this is created, you'll want to get the Package ID for this Task Sequence.  This can be found in the console if you enable it, as I show here:

At this stage, we have a task sequence that's made available to all Windows 10 systems, but it won't actually show up for another 15 years.

Setting up the PowerShell Script

Next up is the PowerShell script, which we'll then use for our application.  First, the code:

Now, go put this PS1 file in whatever source folder you use for your applications.

Setting up the Application

As our final step, we tie these two things together with an application.  Create an application the same way you normally would.  Key aspects here are:

Other than that, you can set whatever type of requirements you'd like, similar to any other application.  Once this is setup, you can deploy the application to your user collection (a test one first, of course!) and once policy updates the users you deploy to should be able to run the Application from the Software Center.  Once run, the bundle will show "installed" until the user reboots and the log file goes away.  At that time they'll be able to run it again if necessary.

First, if you have a better way of doing this, please let me know in the comments - I'd love to be able to build bundles of applications for certain groups and deploy them, and I don't want to run through with the hack of stringing applications together with dependencies.  Second, remember that your PS1 is reusable!  When you setup your next task sequence, just create a new application and change out the Package ID (in both the command line and detection script) and you're ready to rock.

Hi. I've followed the method you detailed but am unable to get it to work. The log file always states the following,

The Package ID of the task sequence is correct.

Hi Dean, have you deployed the task sequence to the system and refreshed the machine policy (or given it enough time to update it on its own)?